To watch the full meeting, which includes a ten minute presentation by Graig Uens summing up three years of work on this project by City Planning, comments from the councillors and deputations from a diversity of citizens, click here and move the time marker to 1:02.29, Item 23.6 : https://www.youtube.com/watch?v=C2kPIOBxLE0

To review the full documentation of the adopted motion – including reports and amendments, click here:  http://app.toronto.ca/tmmis/viewAgendaItemHistory.do?item=2017.TE23.6 This item was adopted without amendment at the Toronto Heritage Preservation Board, March 23. 2017

The Mirvish Village Task Group – a coalition of the four, local residents’ associations that border on the intersection of Bloor and Bathurst Streets – would like to thank Heritage Preservation Services for their extensive work and attention to detail on this file.

The conservation of 585 Bloor Street and the buildings on Markham Street, in situ, in full volume including the roof-lines, is commendable. The recognition of the historic value of the adaptive reuse of vernacular, domestic architecture is encouraging. We hope that this sets a higher standard for any future development proposals.

On Bathurst Street we are heartened by the preservation of the group of five buildings constructed by T.W. Wilson in 1891. However, we would also like to see the three other Wilson buildings – 760, 758, 756 Bathurst – designated and protected to ensure the rhythm, scale of the storefronts and historic context of the block. As one of the earliest commercial intersections in our area, we think the heritage buildings along Bathurst Street warrant more recognition and conservation.

Preserving these twenty-four buildings out of the twenty-seven buildings cited as having heritage value by the Four Corners Study is very much appreciated and goes a long way to honouring this much-storied and beloved part of Toronto. 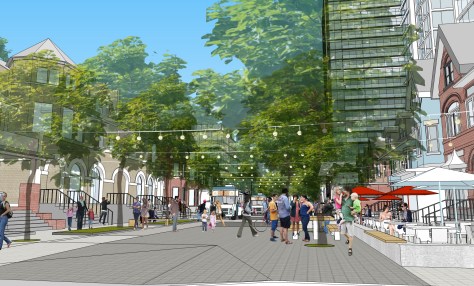 The three images above are of Markham Street, facing north, as viewed from Lennox Street. (Note the mature trees in these renderings don’t exist.) 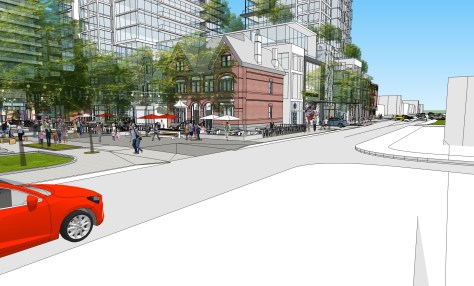 above: Corner of Markham and Lennox, facing east (towards Bathurst Street) from ground level on Lennox Street above: the proposed east-west lane viewed from the opposite side Bathurst Street (B streets condo building) above: Corner of Bathurst and Lennox as viewed from the sidewalk on Lennox  east (in front the Central Tech swimming pool) above: the Corner of Bloor and Bathurst as viewed from street level, looking south. B Street condos are on the left. above: the corner of Bloor and Markham as viewed from the north side of Bloor above:  the view from ground level in the backyards on Palmerston Blvd. above: the view from street level on Palmerston Blvd.

NOTE the renderings above were contributed by Roy Sawyer and are based on Westbank’s. Only the view point has been altered.

FOR COMPARISON to Westbank’s renderings from an aerial view point click here: viewSupportingDoc (5) (1)

On January 25, 2017 the Mirvish Village Task Group met to assess the third submission from Westbank. This is a summary of the group’s comments, which were sent to City Planning and are now part of the public record. For a side by side analysis of the changes made between Westbank’s first proposal and the third click here:  MVTG Deck_7 Feb 2017 FROM CBC NEWS : this link contains video,  photos, text and links to other related stories about Mirvish Village.