To see the updated renderings of the development site click here : viewSupportingDoc (24) 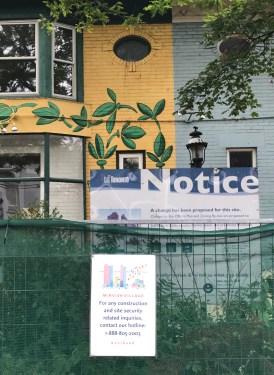 The attached video is an editorial  from TVO’s The Agenda with Steve Paikin.  Is there NIMBYism in Residents’ Associations or is there merit to citizens’ concerns? The Agenda speaks to Toronto’s outgoing chief planner, Jennifer Keesmaat, who is a champion of densification, about the opposition to development. The development in question is an 8 storey building in the Annex but the discussion also references the Mirvish Village Task Group.
click here to view :

At the Annual General Meeting of the Palmerston Area Residents’ Association the following twenty-four, detailed charts and illustrations were presented to the membership by MVTG member Roy Sawyer and City Councillor Mike Layton. 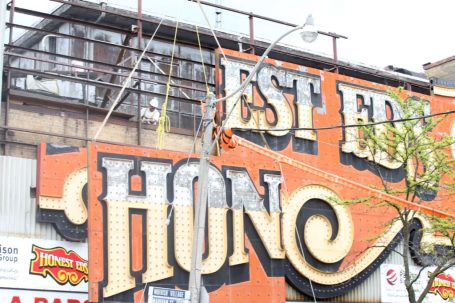 Aird & Berlis and Westbank, other developers with interests in the area of Bathurst and Bloor streets, have appealed the Four Corners Official Plan Amendment to the Ontario Municipal Board

A pre-hearing was held on September 6, 2017 regarding Official Plan Amendment 349, known as the Four Corners, the rules covering development of the sites close to the intersection of Bloor and Bathurst Streets.

Three appellants  with development interest in the area were identified : Westbank the developer of Honest Ed’s and Mirvish Village as well as the other developers of 844 Bathurst Street (the Paulist Centre) and 570 Bloor Street.

All four local residents’ associations – Seaton Village, Palmerston Area, Annex and Harbord Village – were given party status along with the City of Toronto. An additional pre-hearing has been scheduled for January 4, 2018. Mediation may follow. 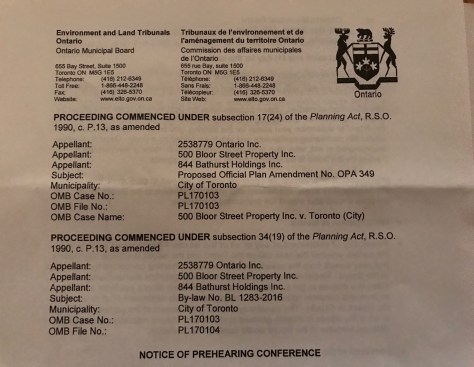 For more on the Ontario Municipal Board, you can view The Toronto Star’s series, Contested Development, Here: http://projects.thestar.com/ontario-municipal-board-reform/contested-development/

This the Public Record of the TEYCC meeting on November 15, 2016. To view the deputations and discussion of Four Corners Report begin at time mark 49 (lower left of the screen)

This analysis of Westbank’s and City Planning’s public engagement process was written by York University student and local resident, Amber Lindsay. She documents and contrasts “meaningful public consultation” and “the illusion of inclusion”.